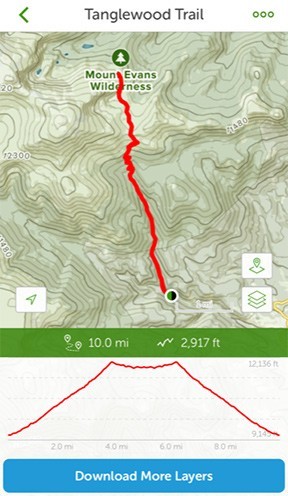 Trail Name: Tanglewood Trail (Out & Back)

The Drive from Denver

This day started out picturesq as the drive from Denver to Bailey is relaxing and beautiful. Part of the drive takes you through Aspen Park and Conifer, which are two areas I would like to live in some day. Approximately 3 miles east of Bailey, you need to turn off on a county road to the northwest, that eventually leads you to the Tanglewood Trailhead, but not before passing though some incredible ranch land with beautiful forests and pastures along the way.

The trailhead is easy to find and is mostly asphalt until the last few miles. Watch out for some decent size potholes near the end but anyone in a car can make it to this trail.

My Day on the Trail

I arrived at the trail a little later than I intended but I was hiking at 7:30am. It was a beautiful crisp autumn day and the temperature was around 40 degrees.

I could tell this was going to be a great hike because it was obvious the scenery was incredible and the rushing mountain stream was magnificent from the start of the trail. 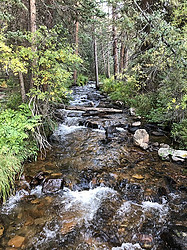 I had to cross the steam several times but it was always easy as there are wooden bridges or logs that have the tops flattened to make it easy to cross. The other stream crossings were not a problem as they all had large boulders that you could easily walk across.

There were many times I had to stop along this stream to watch and listen to the incredible sounds. You sometimes forget how beautiful it is to sit next to a rushing mountain stream. I could also see and hear squirrels, chipmunks and many kinds of birds over the sound of the stream.

Everyone I passed seemed to love being by the stream more than anything else on this hike.

The trail gets a little steep and rocky at times but for the first 3 miles, I would rate the trail as moderate. There were not many steep inclines and it was a rather gradual slope up. The switch backs were a nice gradual hike as whoever created the trail did a great job of picking the path up the mountain.

It wasn’t until around mile 3.5 that things became extremely challenging. This was also the time when I broke out above the tree line and started seeing magnificent mountain views. However, as I was between 11,000 and 11,500 feet, the altitude started to take its toll on me. 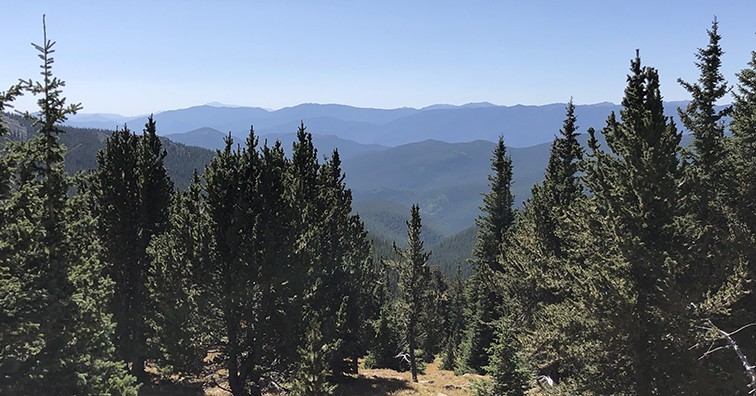 As you will see in the next picture, the trail is pretty, but it started to get steep and the amount of breaks to catch by breath doubled or tripled over what it was a half mile back.

After stopping to catch by breath I noticed a little friend in the tree. He was chewing or eating a pine cone and I had to sit and watch for a while to figure out what he was doing.

I realized that he was eating around the middle and he would chew and then spit a piece out and then stop to eat. He repeated this over and over. I believe he was chewing down to something in the pine cone that squirrels eat and I’m not exactly sure what that is.

I finally reached the high point of the trail but there was still a mile remaining.

I had met some hikers coming back down the trail and I asked them if they went to the end of the trail and they said, no. They said they had started down the trail but the views were all the same and they really didn’t want to hike back up the trail again before heading back down. This is where I had a dilemma about doing the same thing but I noticed Mount Evans off to the northwest (left part of the picture above) and I was sure there would be some great vantage points farther up the trail so I decided to keep going.

It was about another 1/2 mile down the trail that I notice two beautiful mountain lakes. They were both crystal clear lakes and the lower one had some great views out to the east towards Evergreen, Colorado.

The upper lake was just as beautiful and had some awesome looking boulders around it and had some incredible looking colors in the mountain behind it. 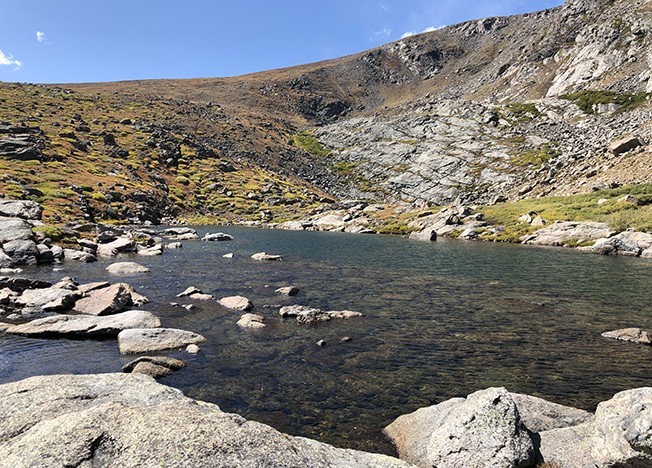 This is an area that I would love to come back to with friends or family and bring a nice lunch and be able to sit and relax and just enjoy the incredible scenery. It truly was relaxing and a beautiful place to hang out.

The Last half of the trail wasn’t that spectacular. The trail was difficult to follow and of course I was wiped out by now. I was able to get a little better view of Mount Evans to the west and the area around Evergreen, Colorado to the east but if you’re tired, then you aren’t missing much by turning back at the mountain lakes.

The Tanglewood Trail, northwest of Bailey, Colorado, is now one of by new favorite trails to take in Colorado. It’s only about 1 hour from Denver but it is isolated enough to not be heavily traveled and better yet, the mountain stream, the mountain views and the mountain lakes are worth taking time to get out and enjoy the Rockies.

This is a trail that I will definitely be bringing family and friends back to in the future.

One final note. If you are taking someone on this hike who can’t handle the distance or the altitude, then just stay on the first 2 or 3 miles of the trail and you will have enough beautiful scenery to make everyone happy.

I spent 9 hours on the trail and I was wiped out. I think you could hike the trail in 7 hours or less but I would allow for some extra time at the lakes to relax and have a nice lunch.

Enjoy more of the trail by watching my short video below of Hiking Trails in Colorado Tanglewood Trail.

Please leave a Comment Below or Email me if you have any questions or have another trail you would like to recommend. 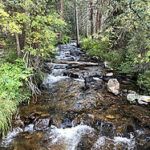